Many thanks to the incredible Mary Akers for tagging me in this latest writer’s meme.

I am privileged to have attended one of her workshops and now serve as a reader and editor at r.kv.r.y Quarterly Literary Journal. I’m looking forward to reading her forthcoming book Bones of an Inland Sea. In the meantime, Women up on Blocks is available from Press 53.

Now for the questions:

What is your working title of your book?

Where did the idea come from for the book?

A few years ago in Buffalo, there were reports of employees at a collection agency that were illegally threatening and harassing people. I wondered what it would be like if a tax collector did that and came across someone who had a deep secret to protect.

What genre does your book fall under?

I think of it as literary fiction but it could appeal to a broader audience.

Which actors would you choose to play your characters in a movie rendition?

Interesting question! Casting directors must go insane trying to match up the ages, talents and work schedules for the actors they want. While it’s not a comedy, Lisa Kudrow for Ellie. Her work on “Who Do You Think You Are” is fantastic. For Selin: Colin Firth. If it was cast older, Jodie Foster and Jeff Goldblum. Brad Pitt for Kyle. Reese Witherspoon for Billie. Oh, and please, please, please–Pierce Brosnan for Lionel.

What is the one-sentence synopsis of your book?

A woman who tries to escape her fame as a poet nearly succeeds until an underhanded tax collector enters her life and then all bets are off as to how far love, fidelity, and loyalty will take a family to protect one of their own.

Will your book be self-published or represented by an agency?

Ideally, an agency, but I have been looking into different ways of self-publishing.

How long did it take you to write the first draft of your manuscript?

Happily, I can say that the first draft was a product of NaNoWriMo. 50,000 words in 30 days. The intensity was thrilling.I’m still editing and tweaking it though, usually while sitting here: 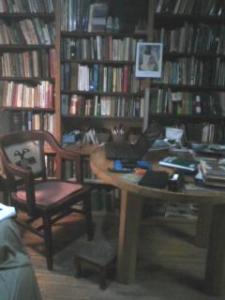 What other books would you compare this story to within your genre?

The Dogs of Babel by Carolyn Parkhurst and The Curious Incident of the Dog in the Night-Time by Mark Haddon.

Who or what inspired you to write this book?

During my first attempt at NaNoWriMo, I had this image pop into my head: Kyle was wearing boxer shorts, cowboy boots and nothing else. Ellie and Billie were engaged in an intense conversation. A dog came out of nowhere and then a shotgun went off. I needed to know what happened to these people, but having read the pitfalls of NaNo, I knew I couldn’t abandon the work I had already started. That year, I finished a first draft of “Dandelion Dreams.” I thought about those other characters and they grew, changed, and evolved until the next November rolled around and then I felt ready to write the book.

What else about your book might pique the reader’s interest?

While the main character is a poet, there is only one poem in the book and it’s by Tanith Lee.