It got to the point where the papers in the “to file” box tumbled over the sides again and while I picked them up for the fifth time, I realized I really had to tackle that job. Bank statements, take-out menus, invitations to events I never had any intention of going to, and stray button batteries lingered in that box for up to two years – perhaps longer – but the box is now empty. Not only did I file, I went through the files and purged them of outdated material. It feels really good to have that done. I have some hope that I’ll get to the filing a bit quicker next time.

(Don’t laugh! It could happen!)

Occasionally, I’ll try the “touch it once” paper solution idea, but that rarely lasts longer than three days because I’d rather work on a story than go through mail the second it comes. Besides, I like lingering over J. Peterman catalogs…

Of course that “good deed” lead to others, like making an appointment with a lawyer to update our wills since the ones we had named a now dead person to be the executor in case we died at the same time, which led to the deed being “quick claimed” so if something happens, (knock-on-wood-it-doesn’t) probate can be avoided. Lawyers are expensive creatures! I mean, I knew that in general, but when I got the bill, I started wondering if I shouldn’t have stuck with my 6th grade goal and pursued a career in the legal profession.

I also went through the stack of “there’s an article/quote/cartoon/recipe I want in here” newspapers. Then, I tackled the print out stack in my office and I can now find the stories I want because they are in folders. It’s a New Year miracle!

All of that good stuff means I’m behind on collecting the tax stuff, but I’m close. I’m also upping my game with writing and submissions. I don’t know how long these good intentions will last, but they aren’t “resolutions” so they have a better shot of continuing than not. I hope.

I think the burst of ambition has a little to do with being inspired by beauty. 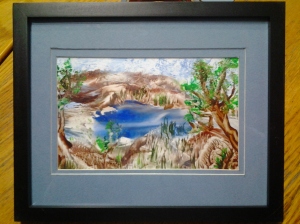 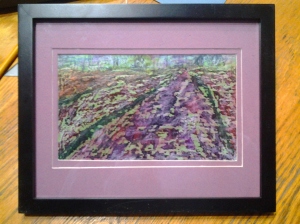 They are both by Mia Avramut. Husband matted them last Saturday and they are ready to hang, but I have them on the shelves of the bookcase where I can admire them for now. They are both so gorgeous; these photos do not do then justice.

So, that’s what has been happening around here. Thanks for checking in!

*These are my Creekside reflections. Your experiences may vary.