Yesterday was my turn to host the novel critique group. Spoiler alert: Early in Near Eden, New York, Pete brings caviar to Tara’s house to win over her cat. Anyways, at the previous novel critique meeting, Mary had said she hadn’t eaten caviar but thought it was salty and maybe the cat wouldn’t like it. Then, New Year’s Eve arrived and listening to NPR that morning, I heard Scott Simon interview Susan Stamberg. She described a dish called Caviar Pie. On the off chance they did, I asked a guy at Wegman’s if they sold caviar. They did, and some of it was reasonably priced. 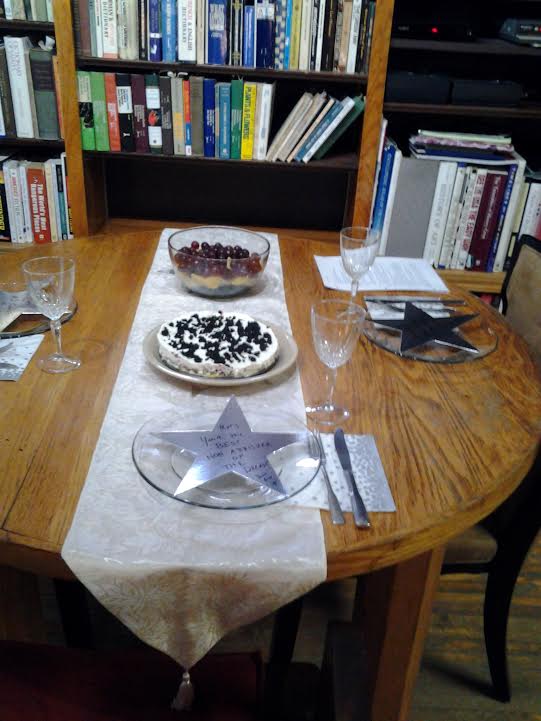 Obviously, not hosting the Christmas shindig created a groundswell of decorating and celebratory angst that needed to be expressed and I’m happy Gina Detwiler and Mary Akers made the drive to put up with it.

My cat didn’t like the caviar cold, but cleaned the stick that held 10 or so fish eggs later that night, just before I left to attend SGI’s French Honor Society induction ceremony. Valerie Brown was making crepes after, but I was quite full by then. When I got home, I received a call from my friend/line editor in California. He wants me to stop querying until we go over the book at least one more time. I don’t want to, though. I probably will, but I’m going to be pouty about it. I think Near Eden, New York is good, and he agreed, but he wants it even closer to perfection. He also hates my query letter because it makes it sound too much like a lighthearted story. I tried to convince him it’s just a romance. He says it’s so much more. I love fights like this and am so grateful these are the problems I have.

And, oh yeah, it’s official, I was duly sworn in and it was on Facebook so it has to be true. I’m a Board of Education Member! Photo courtesy of Colleen Mahoney and the Springville Journal.