In an understatement, let me begin by saying that Thursday was a perfectly terrible day. I got up early to mow the lawn and weed eat before the heat set in. I managed to get the roadside section done but when I took the lawnmower across the bridge to work on the large lawn, I noticed the back left wheel was poised at a 45 degree angle because the deck had broken apart. Good times.

Proceeding to the weed eating, the cordless worked well, but I stopped 2 feet from where the cord would reach – which I didn’t realize until I’d put the cordless away. I did finish both sides of the ditch but when I began the area around the garden, the string ran out.

Did I mention it was a rather warm day? I worked on weeding the patio then went in to work on new book. Wednesday, I’d had a bit of a breakthrough while at SPoT Coffee with Gina and Mary and was anxious to get back to it as I’d come up with a new beginning earlier this month. I saved the file. I hadn’t printed it out. I also hadn’t saved the file in A N Y of the spots where it should or could have gone. I checked, double checked, grew frustrated, panicked, annoyed and then went out to do the rose propagation experiment I’ve only wanted to try for 20 years. Filling the planter and dipping the stems in rooting hormone powder, I convinced myself I dreamt writing those two missing paragraphs. Sigh. I did finally find them, but by then the urge to write was superseded by the desire to read.

That lasted until sitting out on the swing; I looked up and noticed the EIGHT deep purple tulips in the far planter, which had started to open yesterday and should have been picture worthy today, were A L L   GONE. Even the red had disappeared. Bloody stupid greedy deer…I set about placing the fuchsia where the hummingbirds could find them since they are now back and I’m grateful. 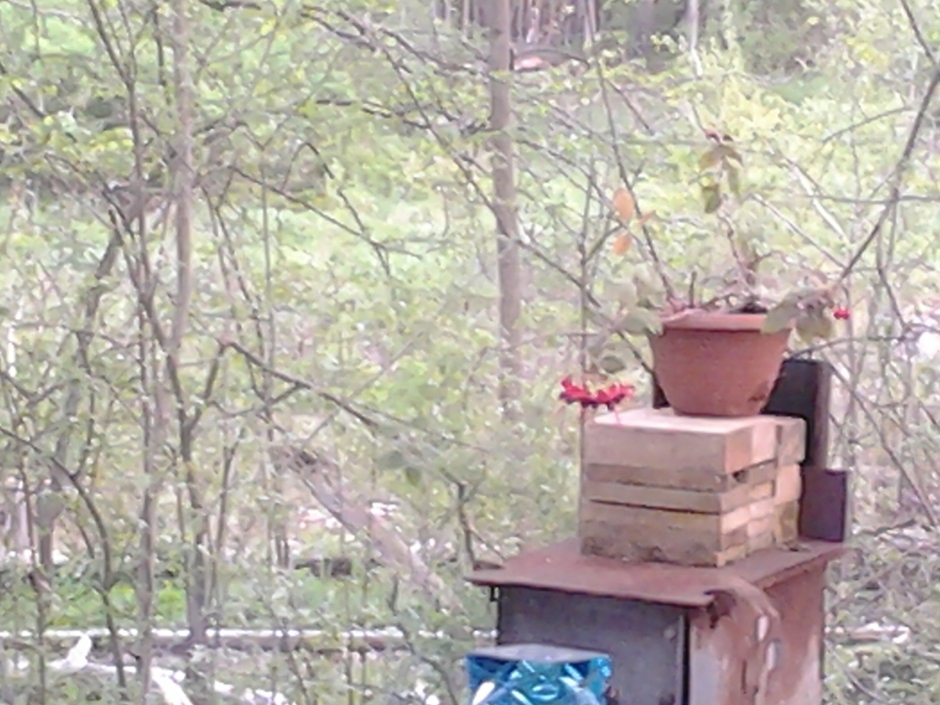 I then worked on cleaning up the pine tree debris until Husband came home. I put the cat on her leash and we were all outside enjoying the weather and catching up. For five minutes, we let cat wander. Dog went toward the creek, I got up to see where the cat had wandered off to…and she was gone. Completely. We looked, hunted, called, I declared her dead and we went to look over the lawn mower. Husband declared it sufficiently broken enough to get a new one. I checked under the car before driving away.

Oh how Wal-Mart was fun today – I’ll spare you the mind-numbing details – let’s just say the time between realizing I could take the display model and the employees confirming this was 40 minutes. Sigh. After that, I picked up an unfulfilling dinner from Top’s deli even though I could have made dinner at home had I not gone through the whole “I’ll check in the back” routine at Wal-Mart.

Anyways, when I returned home, I was sad to hear cat hadn’t been found yet and I worried more because hawks were circling overhead. While Husband got the new mower up and running, I thought about where cat had been known to go before. You cannot imagine how relieved I was to see the end of her leash. She’d holed up in a piece of…ductwork. I really don’t know what it’s called, but it’s black and round and Husband brought it home because he couldn’t stand that it was being thrown away.

Right, so, cat was found, dinner was eaten, not enough reading, writing, or lawn care occurred BUT – knock on pine – this day is over and Because Science is on and I realize yet again the cosmos have a thing to do and sometimes it’s doing us.