I’m back from AWP in D. C. and had the best time while I was there!

For a long time, my novel critique group has been saying, “We should go to a conference together.” Well, things fell into place and after I spent the night at Gina’s house on Tuesday, Mary showed up and we drove to D. C. We got there Wednesday afternoon, checked into the hotel, registered with the conference then we had dinner with the brilliant writer, Pamela Erens.

Up early on Thursday, I went to a 9am panel called, “Demystifying the Business Side of Writing and Publishing.” Andrew McFadyen-Ketchum led it and I learned great things from him, Whitney Davis, Carmen Gimenez Smith, Paula Munier, and Joshua Shenk.

From there, I went to “Time, Space, and Community,” led by Jac Jemec. The ins, outs, and quirks of residencies were discussed by Rebecca Makkai, Rachel Cantor, Erinn Beth Langille (I ❤ her!) and Cheryl Lu-Lien Tan. You know what’s fun? To know one’s underpants are part of this equation.

From the bowels of the Marriott Marquis, I went to the Book Fair and hit my prime targets. I tried to meet Paul Vega and failed. I did meet Kurt Baumeister—author of Pax Americana—and James Reich from Stalking Horse Press. (Talk about a thick business card!) I also tried to see Robert Vaughan at the Word Tango table and P. E. Garcia at The Rumpus, but all I got was an awesome tee shirt and mug that each say “Write Like A M-F.” (Sure, by M-F, I did mean mushroom finder. We can work with that, but I took a picture.)

Mimi Schwartz, Phillip Lopate, Richard Hoffman, and Laurie Stone did a fantastic job of letting me know when real names were important or not during their panel called, “I Didn’t Ask to Be In Your Story: When Real Names Matter and When They Don’t.”

The next panel was awkward for the match up. I mean, ROXANE GAY was there—my hero! During “Beyond the Deadline: Surviving (And Thriving) In Magazine Publishing, it felt like  Katelyn Belyus was doing a great job but her panelists weren’t the target people to ask the questions she was asking. It was fantastic to listen to Chip Blake, Sy Safransky and Ms. Gay and watch them keep their cool. 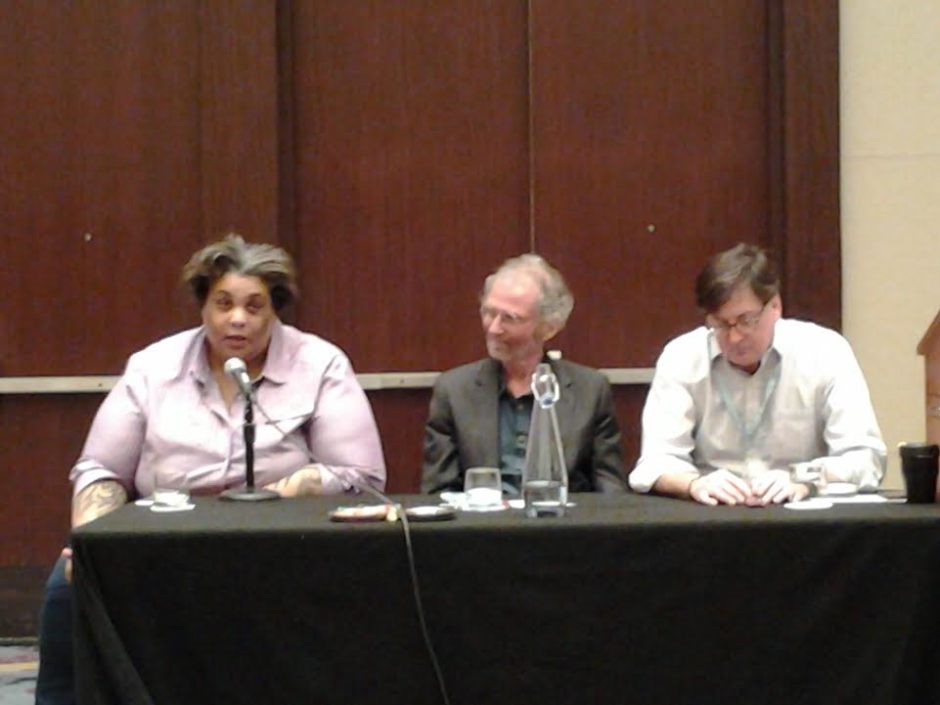 “Women’s Fiction: How to Write It, Sell It, and Market It,” explained the reason why some agents requested comp titles. Thank you Dorian Karchmar!

Meeting up with Mary at the VCCA group meant I got to meet interesting people like Randon Noble. The conversation turned to food, which led to my first time eating Korean food. After that, I also had my first Uber ride with a guy who played a Mr. Rogers YouTube video and I fell a little bit in love with the whole idea of Washington, D. C. as a “city.” 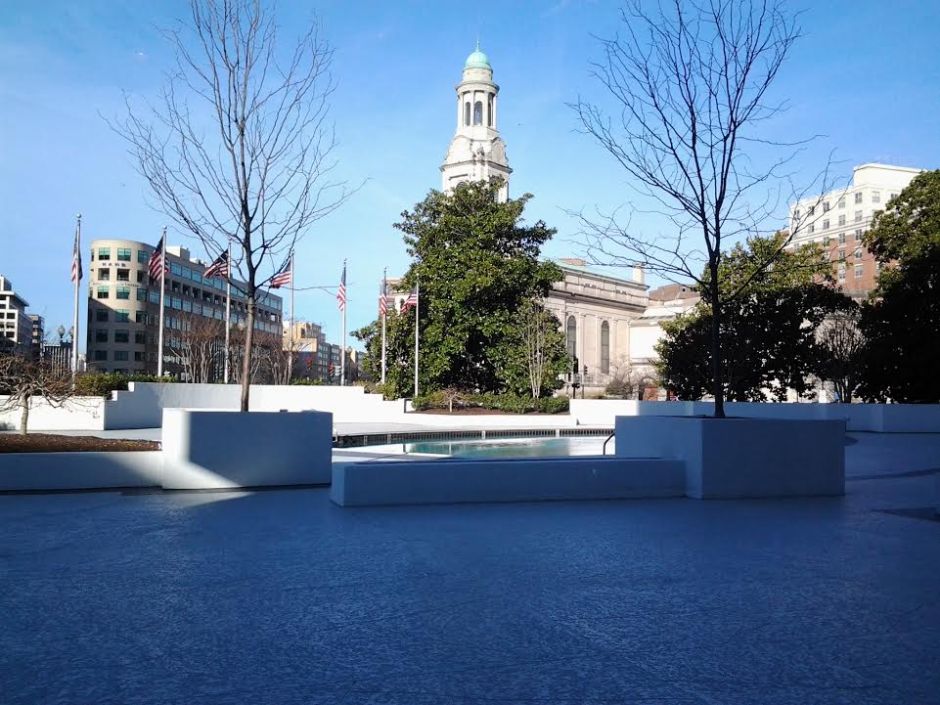 Friday meant Gina and I had breakfast together at the Washington Plaza near the pool. We attended the “Second Blooming: Women Authors Debuting After Fifty.” It was interesting, but I couldn’t help thinking that the people present kept saying they entered multiple contests, which required many dollars to enter so tier success seemed money driven and that bothered me. Does it mean only old people can be published IF they throw down thousands of dollars to win a prize? I didn’t raise my hand to ask Ellen Meeropol, Paulette Boudreaux, Jeanne Gassman or Cynthia Bond because I left there a bit early to call Husband.

From there, I went to “Seeing the Forest for the Trees: Organizing and Structuring Story Collections, but I couldn’t find the archives room on the map, and you know me with maps—I ended up in Salon F for “The Shape of Fiction: A Look at Structuring Novel Length Prose.” I sat down and Cliff sat on the end. A woman came in to claim the seat between us, but Cliff said, “Why don’t you sit in my seat and I’ll sit by my friend.” (Yeah, that’s right, Cliff Garstang referred to me as his friend!) Anyways, Christian Kiefer was the moderator and he was funny. It was an interesting panel with Jeff Jackson, Esme Weijun Wang, Janet Finch and Kristin Chen.

I then attended “From Flash Fiction to Microfiction: How Many words are Enough?” What an excellent panel! Pamela Painter, Sherrie Flick, James Thomas, Nancy Stohlman, and Grant Faulkner talked about prompts and results. Walking over to introduce myself to Grant, I ran into Len Kuntz! He was there with Robert Vaughan! They invited me to their table at the Renaissance for later that night.

After that, I hit the Book Fair again. I saw Gina who was going with Mary to see Emma Straub & Ann Patchett speak in the Ballroom. I thought about going but decided I needed some alone time. At the hotel, I texted Jimmy and arranged a night out with him. He picked me up and we drove to Arlington to pick up his lovely fiancée, Lindsay. From there, we went to the El Paso Café for margaritas and quesadillas. The drive back into Washington was beautiful—multiple monuments were lit up. At the Marriott Marquis, we attempted to find Mary, but couldn’t find her. We popped into the Sewanee Writer’s Conference Reception. I did find Cliff, but it was so loud, we left.

At the Renaissance, we found a table populated with the brilliant Robert Vaughan, Len Kuntz, April Bradley, Karen Stefano, David S. Atkinson, and Robert P. Kaye It was such a great time. Jimmy and Lindsay left after one drink because they had to drive home.

Mary texted, then came to the bar. As that collection was breaking up, Cliff and my new best friend Jody Hobbs Hesler came round and we went to the next bar and before I could believe it myself, it was last call. I toddled back the many blocks to my hotel and in my effort to be Best Roommate Ever, I took off my jacket, blazer, and shoes before I went into my room so not to disturb Gina. Well, I left my blazer hanging on the next door’s knob. I woke to see Gina gone, my blazer missing and vague memories from the night before—a few captured on my phone.

(This last one was from Mary’s phone. Thank you Mary!)

Anyway, after quizzing Mary, I went downstairs, asked at the desk and got my blazer back. I went to the Book Fair, bought Robert’s Vaughan’s Funhouse and he signed it. At the Word Tango table, I got to chat again with the lovely Jennifer Kircher Carr and meet Elizabeth Pettie. I ran into David S. Atkinson and he handed me his book, Apocalypse All the Time, for possible review. I picked up the free book I’d won in a drawing by Writing By Writers. I was supposed to wait until 4 p.m. but as I was leaving, I was able to choose The Small Backs of Children by Lidia Yuknavitch.

I saw Pamela on the way out to meet Gina and Mary. While waiting, I saw the guy from the first panel and had a chance to talk to him and exchange business cards. Such a circle, huh?

It was lovely fun. I’ve left out meeting Gay Degani in the hall just before a panel and getting a hug…not having to feel bad about missing Kim Chinquee’s off-site reading…receiving Mia Avramut’s lovely message…randomly bumping into Claudia Cortese on the sidewalk…finding P. E. Garcia’s voice fine, not strange…getting to meet Paul Vega later on…Beth Gilstrap recognizing me…and a thousand other details that were fabulous though not as fabulous as you for having read all the way through!

It’s great to be back though I did have to have my picture retaken at the Board of Education meeting on Monday night and the weather returned to winter and it looks like this outside:

*These are my creekside reflections. Your experiences should vary.