In theory, I should be headed to Lockport for the novel critique group meeting at Mary’s house. The threat of 2-3 feet of lake effect snow negated that trip so I was able to get farther along in the Pete and Tara book.  I’m so close to the end and I’m excited—in a tempered way. I’m trying desperately to not think about the next steps. I’ve been editing as I go, so that isn’t the problem, it’s the thought of another round of that fun game I call “Agent Hunt.” Hell, I’m still waiting on responses from the last round for the last book… 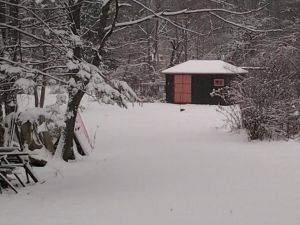 Prize for “First Christmas Card to Arrive” this year goes to a dear friend in Kentucky. Poor thing thinks she’s behind a letter to me. Sorry Natalie, that’s me. I’m the one who owes you two letters now. I’m sure I owe other people letters, too. I get caught up with writing and then assume that social media will fill in the gaps, but the people that I write to and write to me are often not on social media. I need to be better disciplined about such things. I think I’ve said that before. It sounds familiar somehow.

Remember to shop local! I stopped in at Herbs & Things last Saturday and found gifts for the few I’m buying for this year plus a gift for me at Kellie Shanley’s shop. I’m loving the scent diffuser I bought there—far more lovely and useful than a lava lamp.

All right, it’s short this time, but I do want to say that I am so ecstatic that the Journal of Compressed Creative Arts accepted “Meeting Notes”— one of the original Pete and Tara stories (which didn’t make it into the book but became the genesis for it). THANK YOU RANDALL BROWN!!!! In the funniest bit of irony, that story is set at a school board meeting and today, the questions that are going to be asked of the candidates at Monday’s board meeting arrived in my inbox this morning. I’m going to have to start writing historical fiction so things like this will stop occurring. 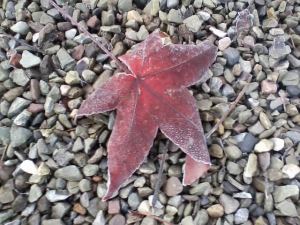 This morning, between the spats of rain, I’ve seen a swallowtail butterfly flitting around the flowers. Yesterday, I spotted a newly hatched monarch and I was so grateful that Husband made an effort to mow around the milkweed.

I’ll often stop washing dishes when the hummingbirds come to the feeder on the window outside the kitchen, but Tuesday, it was empty and I washed and filled it. I still had my hand on it – standing right there so it wasn’t like I was trying to camouflage myself – and a hummingbird came to feed. I don’t know if it was extremely hungry or incredibly trusting, but it was a thrill to be so close and feel the wind from its wings. I have this lovely friend who sends out a newsletter about nature, animals, and spiritual concerns. Because of her, I’ve been more attuned to nature recently and noticing strange things like that occurring more often, probably only because I am paying attention.  (Thank you Kellie!)

Recently, I used my gift card to Barnes and Noble to purchase one of those calendar organizers, you know, the ones that look impossibly thick with pages to plan your week and list goals and you wonder why anyone would ever need one that size. Let me tell you, I didn’t realize it, but I have needed one for a very long time. I’ve only had it for a few weeks and I’m already amazed at how easy this has made my life. So, Stepson, if you’re reading this, thank you for the Christmas present.

Yesterday was Husband’s birthday and even though it was a milestone, he didn’t want a fuss, so he didn’t get one, but he did get a card, a pan of brownies instead of a cake, and a case of his favorite beer. 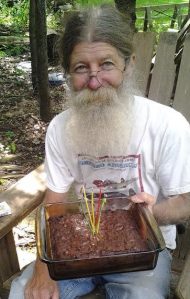 I posted a similar pic on Facebook and was delighted at the number of likes and birthday wishes it generated. Also, I know it’s small minded and petty, but I do wish people wouldn’t use his first name on Facebook, because, well, I’m not sure he wants to be associated with the likes of me via social media.

And Husband’s birthday is not the only close family member’s birthday this month. There are at least seven, plus two friends that are like family, and there’s a baby shower to attend and an ex-in-law’s anniversary to celebrate, so yes Hallmark, I am keeping you afloat…not that I expect a big company such as yourself to send me a thank you card.

Besides sending out tons of greeting cards, I’ve also been weeding the garden, mowing the trails, weed-eating the labyrinth, reading, making and drinking gallons of sun tea, cooking, cleaning, stressing out over Stepson’s impending wedding and the guests we’re putting up and the accompanying dinner menus, who’s getting where and when, attending Board of Education meetings, Hamburg Writers Group Meetings, looking forward to the novel critique meeting, being thrilled for friends with book releases (Congrats Gina Detwiler, Jeff Schober, Mary Akers, Claudia Cortese), enjoying the results of the Bemer treatments, being excited to start as a Bemer tech tonight, submitting two things a day because I was down to something stupid like only four things out plus fretting over the pink hibiscus and goji plants that I bought at the East Aurora farmer’s market last week which haven’t gotten planted yet, but man do the bees love them both. 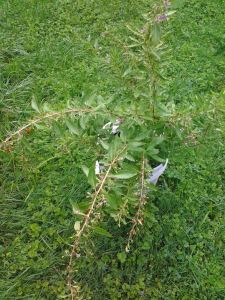 If I was reading this, I’d think that was all I was doing, but actually, I’ve been doing a lot of writing. These two characters, Pete and Tara, will not leave me alone. I’m taking old and new word lists from Hot Pants and even though I can’t find a story with the words, “Boogieman, ankle, Dumbo, kiwi and tax,” they do, and make it all about them. I decided to make them have sex so they’d have what they wanted and leave me alone. Was that good enough for them? No, they were right back at it yesterday and used a Kathy Fish Workshop Reunion prompt to get there. I read that piece, “Sweet Spot,” to Husband and his response was “I didn’t know you had it in you,” which made me not want to associate with him on social media.

Oh, and we have new art! 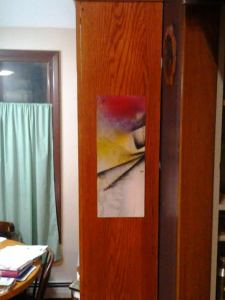