I’m still catching up on the laundry from the family reunion in Essex over the fourth. I think it was Angela who summed it up best for all of us who aren’t blood related:

“Champy,” the monster of Lake Champlain, was spotted and photographed.

I tried to visit the library in Essex–which is right beside a creek, like mine is–but it had funky hours. 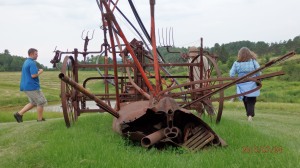 Last night, as I was speeding down old 219 toward home after the “Donut Hole” rehearsal and a B.o.b. campaign meeting, three banging songs came on the radio–all in a row. “Love the Way You Lie” by Eminem and Rihanna, “Come With Me Now” by the Kongos, and “Personal Jesus” by Depeche Mode. Different channels, but still. Anyways, careening around those curves at dusk, volume up, I was in control–but going too fast. It flashed that this is the way my life is going right now and I couldn’t be more delighted.

I’m juggling a lot of things and if I blink, I’ll have added a new chainsaw to the rotation. If you ask if it’s too much, I’ll tell you I’m fine. I am. I know this will peter out or a crash will happen, but until then, I’m “alive” in a way I haven’t been in a while.

I have the 10 minute play by Donna Hoke I’m directing which is going well, but that’s over on Saturday. The campaign didn’t raise enough funds so the Iowa trip has been delayed. I’m preparing the second round of questions for Beth Gilstrap‘s interview for The Tavern about her book, I Am Barbarella. I participated in a writing “joust” and had a ton of fun with that. I’m cranking out new flash pieces since being invited into the “Hot Pants” office in Zoetrope, plus writing a new book in 20 page increments. The garden is weeded and if the rain stops, I’ll get the weedeater going.

Right, so I should be getting on with it. Maintaining swiftness and busyness is a temporary thing, but while it’s going on, I am enamored with that sense of power over my own life. Yes, I know that’s delusional, but it is a nice delusion to have.

(These are my creekside reflections. Your experiences may vary.)