Apparently, the top of a Thermos can go airborne. I heard something shatter and came downstairs. Husband was still in shock that it happened at all. After the top came off, the round rubber band part struck the purple and gold art deco figurine that Bob and Merv gave me years ago. I’m still trying to figure out the angles since the rubber part was found on the other side of the room by the refrigerator. Regardless, I’m grateful it was a thing that got hurt and not Husband–or the cat. Excitement like that–first thing in the morning–is not appreciated though.

Alex Pruteanu’s post on Facebook the other day offered me some relief. He made a comment that he needed to set aside a piece he was working on which made me feel better about setting aside my own. The latest “long work” was getting too close to opening every vein I own. Eventually, I know it will be a great story–and at this point it feels like it will end up being a novella–but not yet.

I have been writing though and had four pieces picked up, including “We Were Those Girls” which made it through the first round of The Gover Prize, so it will be published in Hopewell Publication’s The Best New Writing. I have a drabble called “Snowmancing” in Speculative Valentine Drabbles 2015 (Thank you Jorge Salgado-Reyes and Roy C. Booth!) On Saturday, “The Gnomes They’ve Known” will go live on Slink Chunk Issue 3 (Thank you Tegan Elizabeth!) and “If Only” (a retelling of an Indian folktale) will appear in the anthology Condensed to Flash: World Classics (Thank you Mark Budman!)

For those keeping score, of the last eight pieces I’ve written, four have been accepted and three are still under consideration.

Outside, it’s been snowy and cold, but a flock of four turkeys have been out and about, sometimes coming close to the house. 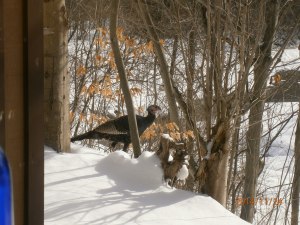 I cannot wait to get back to the garden, but it’s going to be a while. Stupid groundhog.

Well, these are my creek side reflections; your experiences may vary.