I hope your 2013 is starting off to be a great year. Yesterday, I was promoted from a fiction reader to a Fiction Editor at r.kv.r.y. Quarterly Literary Journal. Thank you, Mary Akers! I went through the receipts for the year and gathered all the tax information I have so that dreadful bit which I usually wait until the last minute to do is over and I already have a contest entry and three submissions sent off. My year is starting off very well, and last year was not too shabby. I went to a writer’s conference in Westfield where I met James Goertel, Reg Darling, LouAnne Johnson, and Linda Lavid. I traveled to Binghamton and met Jefferson Rose and his family. My son and his family visited. I saw Chicago again. My garden shed was completed. I had ten pieces accepted (including one which will appear in Rosebud–one of my “dream” publications) and an agent queried me.

While I don’t make resolutions, per se, I’m not immune to the hype for personal betterment in the new year. I do hope that my writing (and editing) skills improve and that my work is accepted in awesome venues. Payment would be nice and finding an agent that believes in my work would be fantastic. I think I have these vague “goals” at all points during the year, but they seem most pronounced in January.

I know it works for some people, but declaring a new start at the beginning of the year has never worked for me. When I quit smoking (on Saturday, it will be the eighth anniversary) it was something I had tried before. I hadn’t been as serious about it until then. And don’t get me wrong, the drugs helped, too. Without Welbutrin, I don’t think I would have made it past the hump. But, I quit on the fifth, not the first. Now, writing challenges and prompts are different. So are deadlines. I have a better chance of meeting another person’s parameters than deciding which things to impose on myself for some reason.

I’m so grateful the holidays are over. Husband has been home too much for my taste. I thought that today I might be able to get back to normal, but no. On the ride over to Weber City, he got a call and he’ll be putting a bid in on a job in Depew this afternoon, and since there will be no time for him to get back to the Buffalo Zoo and get tools out, he’ll be home early again. Yesterday, he was home early because he was all ‘manly’ and had three cavities filled during one dentist visit which numbed his tongue completely. *Sigh* Men…

Cats though, they are sweet and look lovely in ribbons. Since mine is a diva, here are two photos where I tried to capture her New Year’s Eve ‘costume.’ 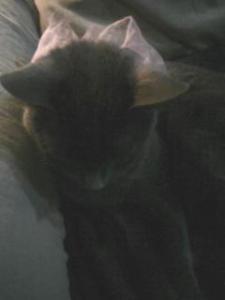 This month there will be an additional posting as I’ve been tagged to participate in the “Next Big Thing.”

Thanks for checking in!

(*These are just my Creekside Reflections. Your experience may vary.)