Hello and happy face emojis to you! We’re less than a week away from November 3rd and that feels great. We’ve made it this far and I’m giddy that tomorrow will bring it closer to five days. Then four…I’m all for free speech, but MAYBE we can curb the running time on these barrages. Two or three months should be sufficient enough time for all the Rs to say the Ds will raise taxes and all the Ds to say the Rs will cut services since that’s all they ever say anyways. I’m also in favor of bringing back the equal time rule that Reagan abolished. I catch a bit of Canadian TV and I love the pot guy running for some office. I’ve forgotten when I saw him, but he represented a third (or 70th ) party candidate and I loved that he got as much airtime as the rest of the candidates.

But ENOUGH about politics! There are other things in the world like hard work and cajoling. It works miracles, I tell ya. For those in the know, the basement is a source of squalor where dead(But I can fix it!) engines, fans, and who knows what else go to live. That’s all fine and good BUT the gas shut off and now the water to the shed shut offs are and the “path” to them was nearing impossible. No more.

As you can see, actual floor can be seen.

The other improvements include the top step no longer tilting, the wooden “landing” at the bottom of the steps is now solid concrete, and the electric to the table saw is no longer in rusty conduit under a ton of sawdust.

It is weird but beautiful to be able to enter from the Bilco doors and walk up the stairs without tripping or contorting. Amen to small miracles.

I’ve been doing more reading than writing. I’m editing, too. I have decided to wait until 1 November to commit to NaNoWriMo. In reality, I’m committed to put in the effort until the 6th. I have a mammogram scheduled on the 5th and if that isn’t perfect, I reserve the right to stop writing. Also, I have no idea what I’ll be writing about yet which is giving me a bit of a panic.

On the 5th, I’ll have a tiny little flash appearing in Milk Candy Review. Cathy Ulrich is not just a fantastic editor, she writes amazing stories, too. Tonight, Nina Fosati will be reading as part of the Persephone’s Daughters series, but if you miss it, you can catch the podcast later. Go Nina!

Autumn has ramped up with cooler temperatures and the damp. I’m waiting for a dry day to tuck the bulbs into the dirt and tie up the fence. I’m also considering taking up deer hunting as an activity. Bambi’s hunger for my plants is driving me to violence. Or it’s the weather. Maybe the decisive politics is to blame. I suppose I should succumb to a regular yoga routine instead. Eh, I’ll save those decisions until the sixth, too.

In the meantime, know that I appreciate you stopping by for the read and enjoy those autumn colors!

Also, if you haven’t already done it, please VOTE!

The long, cold weather resulted in the water under the driveway’s bridge freezing. Solid. We had a bit of a warm up and the snow started to melt. Guess where the water in the ditch went? Yes, right into the lawn and the driveway. *Sigh* When Husband came home last night, we shoveled slush and made a pathway for the water to flow toward the ditch on the other side of the bridge. This morning it was iced over, but the flooding seems to be staunched for the time being. 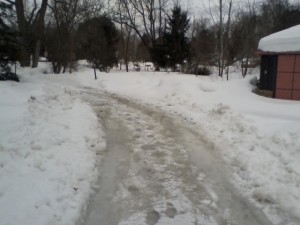 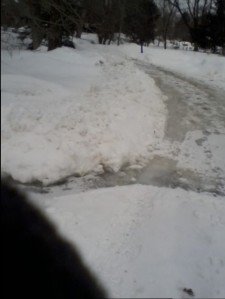 In general, I’m not a fan of driving in winter. Luckily, I have nowhere to go…except to my chair to read. And read I have. In the past month, I’ve read Cheryl Strayed’s Wild, Sylvia Cassedy’s Behind the Attic Wall, Jodi Picoult’s Leaving Time, Tea Obreht’s The Tiger’s Wife, and Allison Pearson’s I Don’t Know How She Goes It.

I also read Ryan Boudinot’s essay, “Things I Can Say About MFA Writing Programs Now That I No Longer Teach in One.” I don’t understand the uproar the piece caused. Not all writers are created equally. Why is that shocking for someone to say that?

The new piece (and I really need to come up with a working title for that thing) had me scared to continue writing it, so I set it down. I’ve worked on a few things, but next week, I’ll have sent half of “Campus Crimes” to the writer’s group and I know from the last book, the end flies by. I have been going to bed with the thought that I’ll dream of which one of the two rough first drafts I have to work on.

What I’ve consistently dreamed of is being naked, but not self-conscious about it and in mostly empty rooms where different men show up. XO man one night, the guy in Australia another night, my brother-in-law the night before that. Right, so as I was telling someone about this (the desire for the dreams to guide me and the nakedness, etc.) it dawns on me that maybe the message is to work on this new book that scares me. I’m not sure I’m ready.

I mean, I really should finish Chuck Palahniuk’s Haunted first…and Gail Carson Levine’s Ella Enchanted. Plus, I need to keep an eye on the lawn drainage situation. Also, I want to add some Yoga to my morning Pilates routine. Where is that DVD? Finding it could take a while. And the kitchen pantry needs a good sorting…

Yeah, I know, that all sounds like I’ll be procrastinating, but I’ve already broken out the colored index cards and tape. Looks like I’m going to plotting “Dreaming Lettie.” Kidding! I’ll be too busy thinking of a working title for the new piece, which will probably continue to tear me open. That’s why I set it aside.

Thanks for stopping by to read my Creekside—and ditch on the other side—Reflections!

We have snow! I was beginning to wonder if we were going to get any.

It’s a new year and so far it’s going well here. How are things in your world? I’ve been keeping up with everything and I feel slightly more efficient–still waiting for the endorphins to kick in, but I’m not holding my breath. I can’t, yoga discourages such things.

Why I decided to try yoga is beyond me. It makes me nervous to do things so slowly. Besides which, I think it is actually making me more antsy than before. Listening to the little weasel politicians the last few days has been torture. Why can’t these morons just get along already? I’ve been making snide comments and veiled threats. If I do it much more (or louder) Husband will take the radio away. I hate it when he does that. Not as much as when he locks me in the library for NaNoWriMo, but it’s a close second.

Holiday visiting was varied and fun. I got to annoy a bird. I don’t want one for my house, but I enjoyed watching it react and preen and chirp. I did not get to see somebody that lives in New Jersey now, but that just goes to show how he’s changed (Uh, BTW Jimmy, I’m giving your bucket of fudge away for blowing us off.) And I really thought Rachael would be in Pennsylvania longer, but she’s already back in Boston so I’m bummed I didn’t get to see her again before she left. (Miss you babe!)

Everything else was good though. We even had a “tree” this year and everything. As it’s being taken down, I remember that is why we don’t have trees. Putting them up is fun, but after is sad and hard. Kind of like writing. The story idea is great, and finishing a first draft is like plugging in the lights, then it sits and you finally have to rewrite.

I didn’t have any intention to, but it’s the fifth of January and I have 5 things submitted. If I keep it up–a submission a day–I’ll easily surpass last year’s output, which was 263.

I got confirmation that my submission to the Minotaur Books/ First Crime Novel Competition  was received. I had opted for delivery confirmation and saw that it was forwarded and I couldn’t figure out why. Once  it was delivered, guess what? I addressed my entry just like I was told to, but I was given the wrong zip code. So, whatever. It arrived. I believe I did everything right and that’s why I received the notification I did. I can’t find stats on previous years, but I bet it’s a tough competition. Keep your fingers crossed. I’ll let you know if I hear anything more.

I’m off to work on my entry to the Amazon Break out novel contest, wait…Ouch. There’s the first rejection of the year. Welcome to 2012!